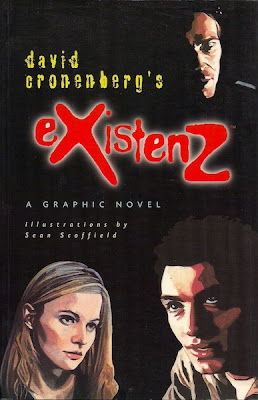 For nearly two decades, The Dead Zone stood as my favourite Cronenburg film – then along came Spider, A History of Violence, Eastern Promises, and A Dangerous Method. The Toronto filmmaker has been going from strength to strength this millennium, encouraging me to catch up on everything I'd missed.

Last week it was eXistenZ, Cronenberg's fin de siècle nightmare about gamers, the gaming industry and Blinky the Three-Eyed Fish. One of the director's body horror films, the title refers to a new game system contained in a disease-prone pod that is in fact "an animal grown from fertilized amphibian eggs stuffed with synthetic DNA." You play by inserting a 12-foot UmbyCord of "twisted, translucent, blue and red veiny vessels" into your spine through a permanent Metaflesh bioport. 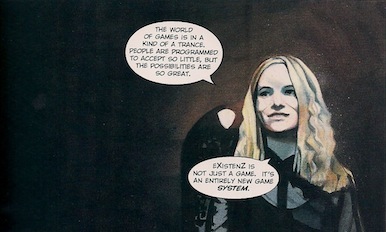 Jennifer Jason Leigh stars as Allegra Geller, the designer behind eXistenZ. A "game-pod goddess", she's just begun leading her fawning followers through a test when things appear to go very, very wrong. First, an assassin tries to kill her with a gun made of flesh and bone (she takes a tooth in the shoulder), then she's saddled with timid Ted Pikul (Jude Law), who is not only an ineffective bodyguard but an UmbyCord virgin. 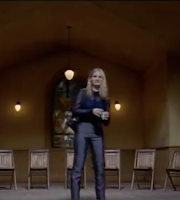 I knew something of what to expect from eXistenZ through this odd book, which is as far as I'm aware the only graphic novel made from a Canadian film. Purchased back in April 1999, it did a disservice in  discouraging me from taking a trip to the cinema. Where on screen eXistenZ is disorienting in its depth, on thin paper it's just confusing. 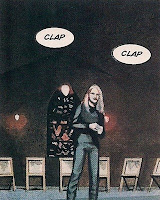 Illustrator Scott Scoffield takes the film's murky look and renders it black, at times obscuring vital detail. His panels look like stills that have been manipulated with a paint-simulation filter. Who knows, maybe they were. The dialogue is all here, but the acting is absent. Faces float, washed-out and emotionless in the darkness.

There is no drama. 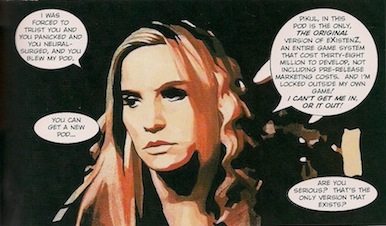 Don't get me wrong – as a film, eXistenZ is not a triumph – but it is worth seeing.

Warning: Not for the squeamish.


Better yet, see Cronenberg's A History of Violence, which – interestingly – was adapted from John Wagner and Vince Locke's graphic novel of the same name.

Warning: There will be violence.

Did that need saying?

Object: A slim paperback – 111 pp – containing the graphic novel, an uncredited interview with Cronenberg, an uncredited essay on his films and a Glossary (uncredited).

Access: My copy, signed by Messrs Cronenburg and Scoffield, was purchased new for $24.95 back in the spring of 1999 at Toronto's TheatreBooks. "Very scarce thus", claims an online bookseller (who offers two copies). I'm not so sure. I remember plucking mine from a teetering stack of signed copies. In fact, half of the fourteen currently listed online are signed by both men; prices range from US$40 to US$98 (condition is not a factor). Unsigned, "as new" copies begin at US$4.09.
Brian Busby at 2:36 PM
Share