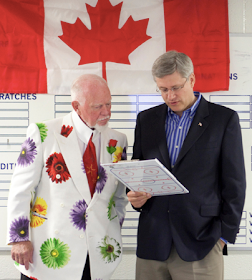 Summertime and the living is busy... so busy that it wasn't until this past weekend that I finally got around to reading the annual Fall Preview issue of Quill & Quire, "Canada's Magazine of Book News and Reviews". Such riches! A new collection from Alice Munro, a memoir from Neil Young and – ahem – a selection of John Glassco's letters edited by yours truly.

Yes, riches, but I couldn't help but feel let down. Where, I wondered, was the prime minister's hockey book?

True, he's been promising the thing for years, but last December Mr Harper let it be known that it was finished and a 2012 pub date had been set. The news came courtesy of Jane Taber, who ended a Globe & Mail fluff piece about her invitation to 24 Sussex for "a Christmas drink" thusly: "Finally, there is a publishing date for the long-talked about and much-anticipated prime ministerial tome one [sic] hockey history. Mr. Harper said that after writing for 15 minutes every day for eight years, the book will hit the shelves next year."

Tonda MacCharles, who was also invited for a cup of Christmas cheer, reported something similar in the Toronto Star... and the rest chased the puck:

In fact, there was no publication date, nor was there a publisher. What's more, the PMO soon revealed that the dedicated Mr Harper was still setting aside fifteen minutes each day to write his book.

And so, I sighed... and reminded myself that the prime minister first told us he'd finish the book in 2006.

Then, on 25 February, my rolling eyes were drawn to a Toronto Star story that the book had "sparked a bidding war among major Canadian publishers." What's more, Bruce Westwood of Westwood Creative Artists had confirmed that in just six days the prime minister would choose the winner.

No publisher stepped forward in triumph, Westwood has issued no press releases, and the media appear wholly disinterested. Not one outlet, Quill & Quire included, has remarked on the fact that "the long-talked about and much-anticipated prime ministerial tome" was not on any publisher's fall list.

Meanwhile, the Conservative Party website has it that our prime minister is still writing away: 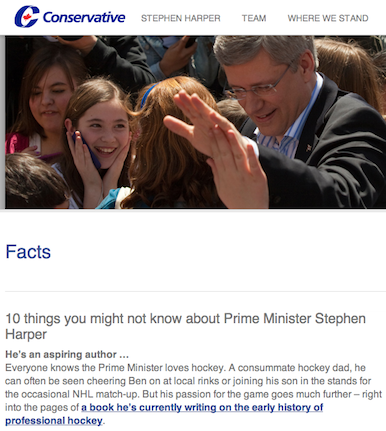 One hopes that this year's Christmas tipple will yield more info. Until then, I leave you with these words from sportswriter Stephen Harper:


I meet with many world leaders and representatives of foreign governments and invariably the subject comes up. Many have observed to me that we Canadians are seen as generally a pretty modest, quiet, unassuming-type people – but they notice with Canadians that when the subject of hockey comes up we get very loud and start waving our arms around. It's a bit of a standing joke.* 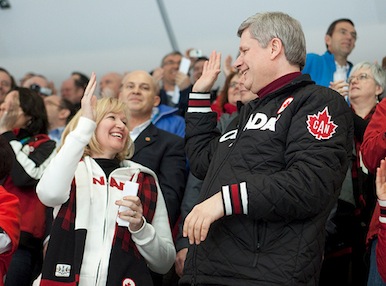 * From the prime minister's Foreword to How Hockey Explains Canada by Paul Henderson and Jim Prime, published in 2011 by Triumph Books of Chicago, Illinois. There is no Canadian publisher.